Forgive me while I get all PSA-y on you. This is near and dear to my heart.

1 in every 88 kids is diagnosed with Autism. 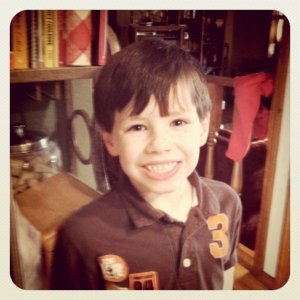 My eight year old is high-functioning autistic. His autism isn’t overly noticeable upon first glance but it comes out in subtle ways, especially if he’s having a bad day. My little guy was diagnosed 3 years ago this month and, at that time, the hubby and I wrote up this short summary of Autistic behaviors to share with our friends and family.

Autism is a brain development disorder that first appears during infancy or childhood. Symptoms are different for each person and tend to continue through adulthood, though they may become more subtle over time.

For us, it was abnormal speech development that tipped us off originally. Hearing tests, speech therapy and an Early Intervention Preschool led us to a high-functioning Autism diagnosis when he was 5.

A common sign of Autism is noticeable social impairments; autistic people often lack the intuition about others that many people take for granted. They also tend to have impairments in communication as well as restricted interests and repetitive behavior.

Here is some more information about these three groups of symptoms:

These become apparent early in childhood. Autistic infants smile and look at others less often and respond less to their own name. Autistic children from 3-5 years old are less likely to approach people spontaneously, or to imitate and respond to emotions, communicate nonverbally, and take turns with others.

My little guy used to be that way when he was younger, but he’s pretty social now. Unfortunately he doesn’t know his boundaries very well. When he talks to strangers – which he LOVES to do – he often reaches out and touches their clothing, like a zipper, a belt, a pocket, etc. He fiddles with it while he gets his words out. He’s not trying to invade your personal space. He’s just building a bridge to communicate with you.

About a third to a half of individuals with Autism do not develop enough natural speech to meet their daily communication needs. People with autism have difficulty understanding non-verbal communication, including body language, facial expressions, or tone of voice. It’s important to make messages verbal and explicit when talking to them.

Learn about it. Be AWARE. Next time you see a kid having a meltdown in a store or on a plane then maybe it will be a little easier to understand because maybe, just MAYBE, that kid is Autistic. You won’t know. Please don’t judge that parent. They are doing the best they can. They need your understanding, your awareness and your support.

That’s an important point so please indulge me for a minute on my soapbox: Seriously, if you tell me to shut my kid up or calm him down you will see my fierce Mama Bear side come out and I’ll tell you exactly where you can shove your judgment. I’ve been pretty lucky with my boys, but I’ve seen mothers harassed on planes and it sends me through the freakin’ roof. I stick up for those moms. I give them encouragement and tell them to ignore the bonehead a-holes who HAVE NO SOUL. And then I leave them alone to deal with their child with, hopefully, a little less stress and a lot more “someonehasmyback-ness.” Compassion people. It’s not that hard. Soapbox off.

Be aware. Be compassionate. It takes a village.

Error: Twitter did not respond. Please wait a few minutes and refresh this page.